How to get here

The city of Lignano is blessed with a key location, with the lagoon on one side and the sea on the other, immersed in a lush pine forest and close to art cities, such as Venice, Trieste and Udine. 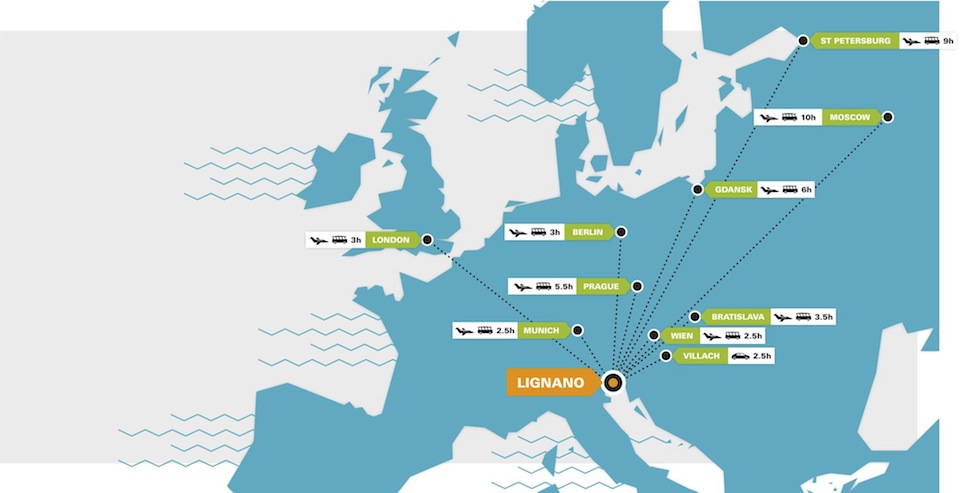 The town of Lignano enjoys a strategic location, with the lagoon on one side and the sea on the other, set in a verdant pine wood and on the doorstep of splendid art cities like Venice, Trieste and Udine.

Lignano Sabbiadoro is easy to travel to as it is linked to the main motorways and served by airports and railways.

Shuttle bus services run from the nearby train stations and from the major international airports.

On this page you can find all the directions for travelling to Lignano easily and by any means of transport.

Travelling to Lignano by car

Take the A4 Venezia – Trieste motorway or the A23 Tarvisio - Venezia and exit at the Latisana tollbooth. Continue along the SS 354 road towards Lignano for about 18 km.

The A4 and A23 motorways are linked to the main Italian and European motorway intersections.

Travelling to Lignano by bus

The local transport company TPL FVG runs a town (in summer) and out-of-town service. The out-of-town routes connect Lignano Sabbiadoro with the main inland towns and with Udine.

The ATVO bus service also operates in the area with connections to the nearby Veneto region and airports.

Travelling to Lignano by train

The Milano-Trieste railway line passes about 20 km from Lignano Sabbiadoro. Latisana-Lignano-Bibione is the nearest train station for the seaside resorts

There is a regular daily bus service from each station to the nearby seaside towns, including Lignano Sabbiadoro.

Summer 2021's news: if you arrive by train to Latisana station, the connection to Lignano is included thanks to the service  "Lignano Link".
You can buy the combined ticket train + bus on the website www.trenitalia.it: just select Laignano as departure/arrival train station.
Coinciding with regionals and FrecciaRossa trains, it will be possibile to use the service until 13th september 2021, throught 46 daily trips.

Travelling to Lignano by air

Lignano is about one hour’s drive from the international airports of Venice Marco Polo, Trieste Ronchi dei Legionari and Treviso Canova.
These airports are all connected to the beach by a regular train and bus service.

From the airport, you can travel to Lignano Sabbiadoro by:

From the airport, you can travel to Lignano Sabbiadoro by:

Travel to Lignano by bicycle

You can travel to Lignano by bicycle along the SS and SR roads, but there are also trains and boats that accept bicycles, thus making them particularly suitable for cyclists.

Certain trains identified by the special symbol allow passengers to take their bikes, as do all regional trains (excluding long distance ones), even without the symbol but depending on the space available in the corridors and without inconveniencing other passengers.

For groups of over 10 bicycles, you need to make a booking to the Centro Compartimentale Comitive or the station of departure at least seven days before your date of travel.

Special boat connections with Lignano Sabbiadoro are available to cyclists during the summer, specifically:

Travelling to Lignano by taxi and transfer

Local taxi and transfer companies offer transport to and from the main airports, train stations and tourist attractions.