A day in Aquileia will let you discover the wonders of one of the cities on the Italian list of UNESCO World Heritage Sites which is also one of the most important archaeological sites in the country. 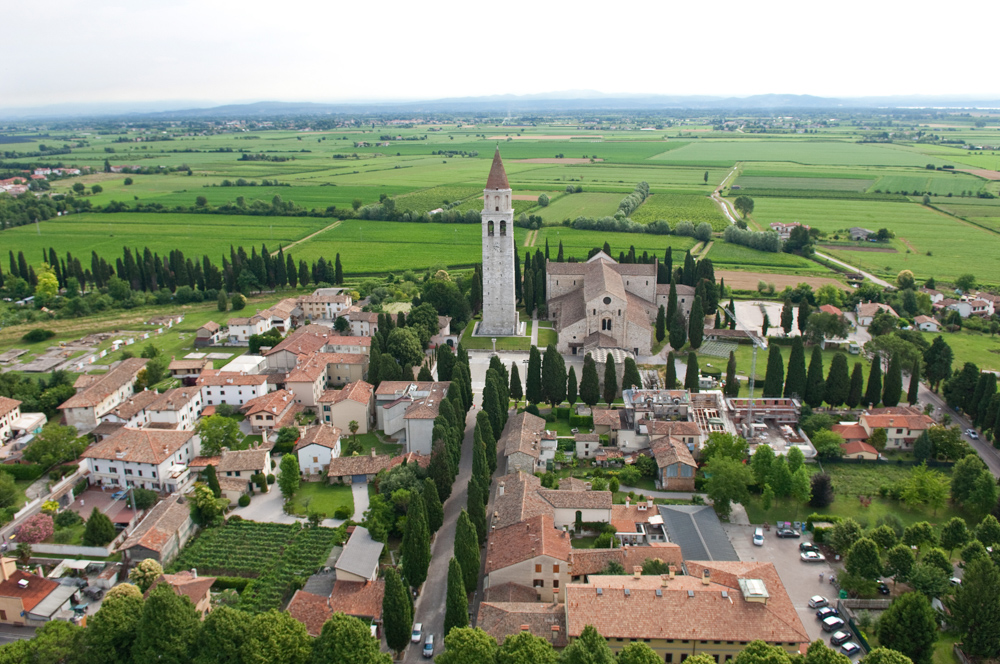 Aquileia, defined by some as “the second Rome”, played a fundamental role in Roman times, becoming one of the most important cities of the Empire.

Founded in 181 B.C.E. to defend the borders and as an outpost towards the Danube, Aquileia owed its fortune precisely to its strategic position between the Isonzo and Aussa rivers and the Adriatic Sea that made it a very important commercial centre. Today, a walk through its cobbled streets is a journey through time between historical artifacts and buildings of the time.

How to reach Aquileia from Lignano Sabbiadoro

Drive along the SR (Regional Road) 354 towards Latisana before taking the SS (State Road) 14 in direction the Cervignano del Friuli. Before arriving in Cervignano, take the SR352 which leads directly to Aquileia.

8 things to see and do in Aquileia 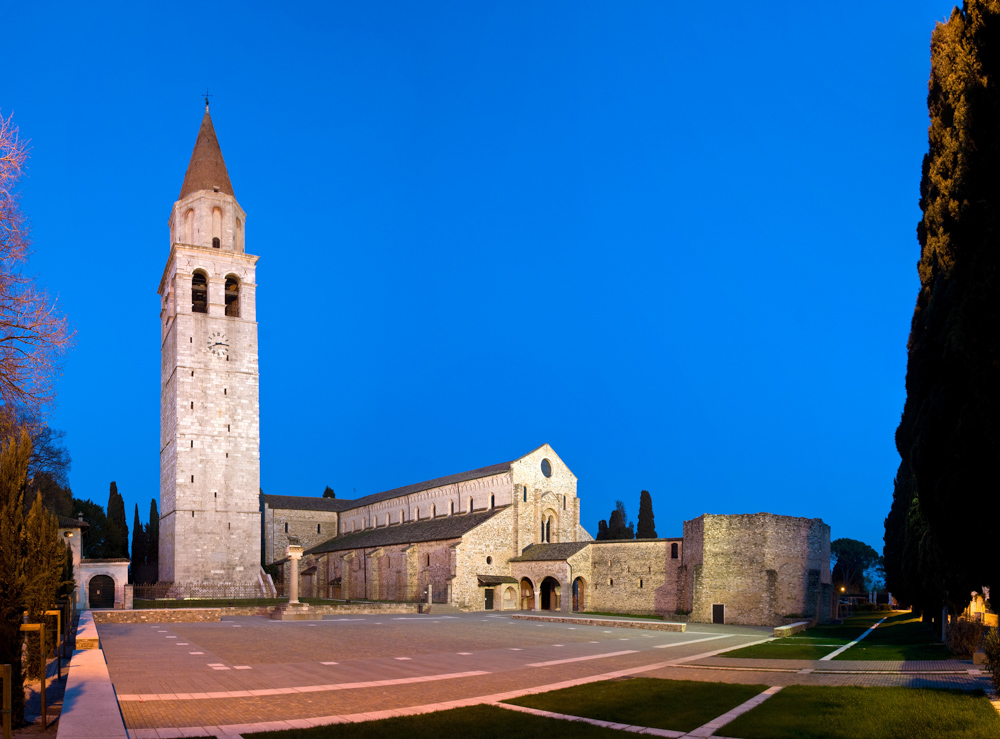 The basilica complex of Aquileia preserves some of the most beautiful treasures of the ancient city. It is composed of the Basilica, the Baptistery and the Bell Tower, all overlooking a large square surrounded by trees and greenery.

The Basilica, dedicated to Saints Ermacora and Fortunato, is a true monumental jewel dating back to 313 C.E. The interior houses a polychrome mosaic floor, the largest early Christian mosaic in the Western world. Also set within the complex are the crypt of the excavations, the crypt of the frescoes and the baptistery.

From the bell tower - over 70 metres high - it is possible to enjoy a panoramic view that extends from the Alps to the Karst. 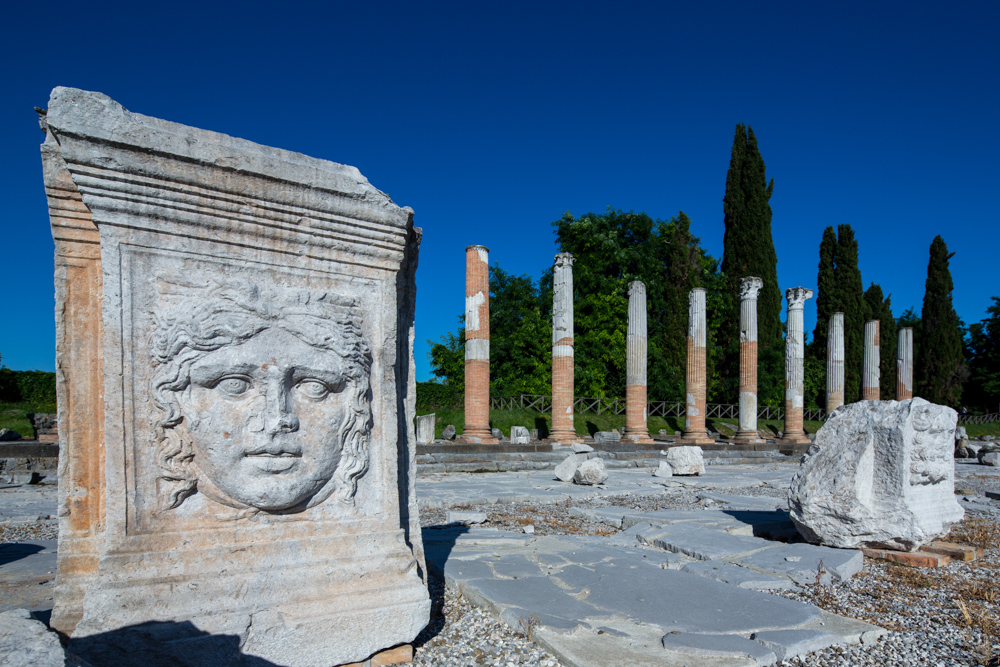 Not far from the basilica complex and clearly visible from the road that crosses the town, one can glimpse a first view of the extensive archaeological area that contains so much of the Roman history of Aquileia.

It is precisely the archaeological area that in 1998 earned Aquileia its inclusion in the UNESCO World Heritage lists.

Some archaeological remains are visible outdoors with free access and include the forum, the river port, the markets dating back to late antiquity, a necropolis area called the “sepolcreto” and some domus with notable mosaic fragments. 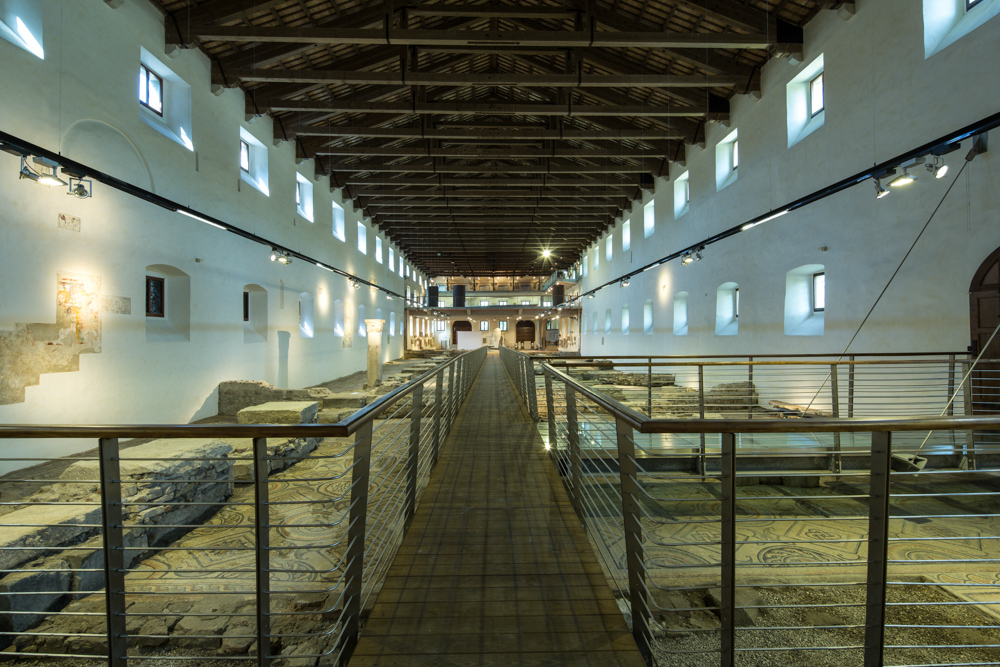 Much of the historical wealth of the city of Aquileia is preserved in its two museums which are a must, and not to be missed for a complete and in-depth picture of the beauties of this important corner of Friuli Venezia Giulia.

The National Archaeological Museum of Aquileia, with its new layout and new itinerary, inaugurated in 2018, recounts the story of the ancient Roman metropolis and includes a vast collection consisting of inscriptions, funerary steles, portraits, statues of various divinities and artifacts in common use from various sources.

The Early Christian Museum is an archaeological area set within a museum structure.
Located on the remains of an ancient early Christian basilica, it preserves the mosaic floor in situ, but also exhibits the elegant mosaic remains of a second basilica that is no longer visible and a collection of funerary stelae.

4. Go on the walking tour using the audio guide

By contacting Promoturismo FVG’s Infopoint, located in Via Iulia Augusta, you can request the multilingual audio guide to let you independently follow the walking tour of the major historical points of interest in the town. With this tool it is possible to discover curiosities about Aquileia in complete autonomy and in your own time.

The places that the audio guide touches on are the most important ones already mentioned above, that is to say the Basilica, the Archaeological Park and the National Archaeological Museum. The route is accessible to people with motor disabilities.

After having taken in so much culture between visits to museums, basilicas and archaeological areas, it’s also essential to keep the body going too by sipping good wines and savouring typical local products. In fact, like all of Friuli Venezia Giulia, the area around Aquileia is also renowned for its good wine.

Here, following the itinerary of the Strada del Vino e dei Sapori "Da Noi in Riviera", (the “With us on the coast’s Wine and Tastes Route) you can visit excellent local producers making fine wines and much, much more!

6. Follow the final stretch of the Alpe Adria cycle path

The Alpe Adria Cycle Route - the cycle path which descends from the state border in Tarvisio and ends on the seashore in Grado - passes right through here!

Aquileia is therefore an unmissable stop for passionate cyclists visiting Friuli on their bikes, but not just for them… the bicycle represents a comfortable way to get around for all those wanting to explore the city and its surroundings safely, taking advantage of the cycle path and perhaps going as far as the nearby Palmanova (20 km away) and Grado (10 km). 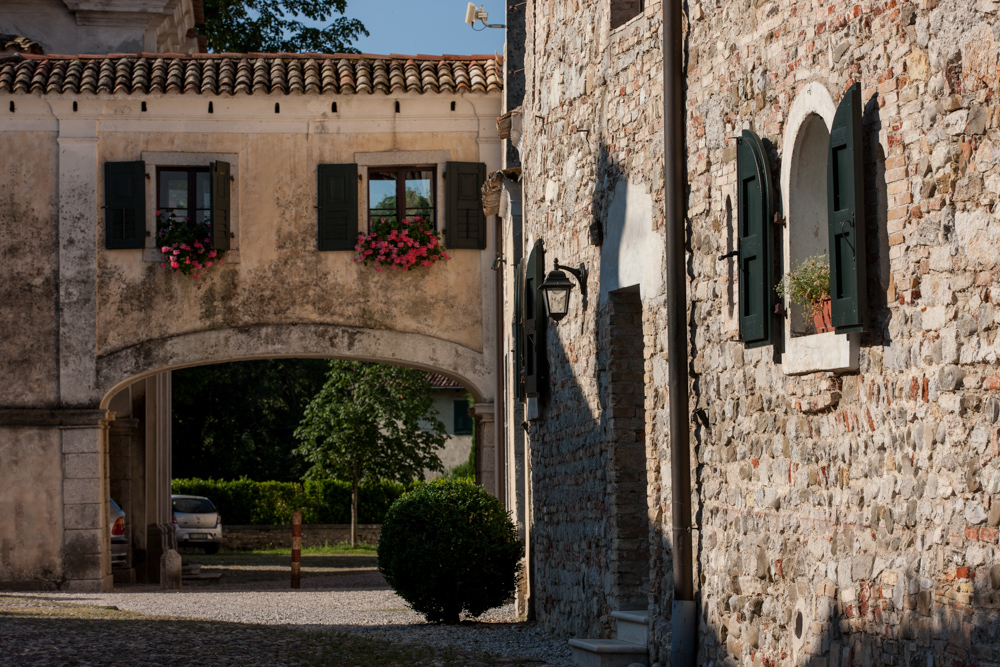 Speaking of the surroundings, among the unmissable things to do when in Aquileia it is well worthwhile visiting the nearby village of Strassoldo. This small hamlet is laid out around its castle, still a private residence today and therefore not always open to the public but, by organising it in good time, it is possible to plan a guided tour or get in to see it during particular events.

Every Sunday at 6 pm the Castello di Sopra opens for a guided tour that includes a visit to the villages of the two castles as well as a visit to the castle of Strassoldo di Sopra itself and its park. Information and reservations can be obtained by contacting the Castle.

Also fairly close to Palmanova it is possible to visit the autarchic city of Torviscosa, the town-factory that was designed to house the managers and workers of the SNIA Viscosa company.

The town, built in the 1930s, has the characteristics of the regime architecture typical of the towns that were built following the thorough reclamation projects of the Fascist period, but also exhibits the urban organisation sought by the factory, with a division by functions and professional categories. Its CID museum (Documentation Information Centre) is very interesting and is open on Saturdays and Sundays from 3.00 pm to 7.00 pm.