The first version of the San Giovanni Bosco Parish Church was built between 1937 and 1938 but was demolished during the war.

In 1945 the San Zaccaria Church became too small to hold all churchgoers and so, in 1945, the Church of San Giovanni Bosco was built, which went on to be extended between 1989 and 1991.

The upper church was named after Our Lady of the Adriatic and its people, while the Crypt kept its dedication to San Giovanni Bosco.

The architectural design of the upper church is dynamic in an superfluous play of volumes, which develops around the central pivot of the altar, which continues on to the outside with the extremely bold spire, in the plasticity of the reinforced concrete ceiling, which swells up like the sails of a boat that is pushed by the wind, as well as the rich colours in the stain glass windows, which are meant to symbolise the exaltation of light and the sea.

The interior of the Crypt is a single room: the altar is supported by three bas relief pillars from the Latisana artist Lionello Galasso, which came from the old church, as did the tabernacle and the columns that support the baptismal font. Statues of the Madonna and Child, created by an Ortisei artist, and San Giovanni Bosco, made in 1936 by the Gruppo di Cooperatori Salesiani di Udine – the Salesian Cooperative Group in Udine - are alongside the central Christ on the Cross statue. This acknowledges the community of Lignano in their choice of the choosing the saint as namesake. 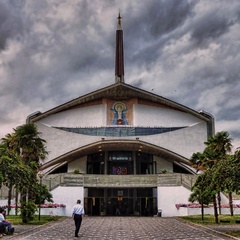 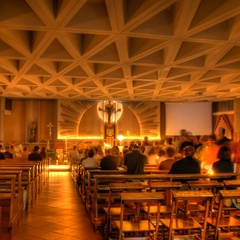 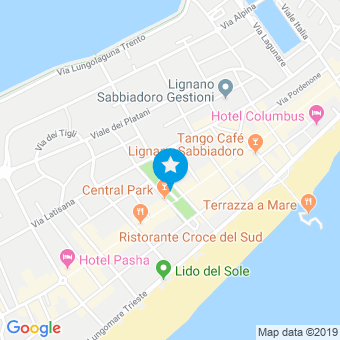 Discover all the activities that you can do with us!