A Summer of great events!

A Summer of great events!

When the warm season arrives, do you also have a great desire to attend a concert to enjoy the live music of your favourite singer or band?

This year you will be able to do it again.

In Lignano Sabbiadoro it will be a summer full of great concerts and shows organized in many locations around the city, where you can participate with your friends, family and loved ones. 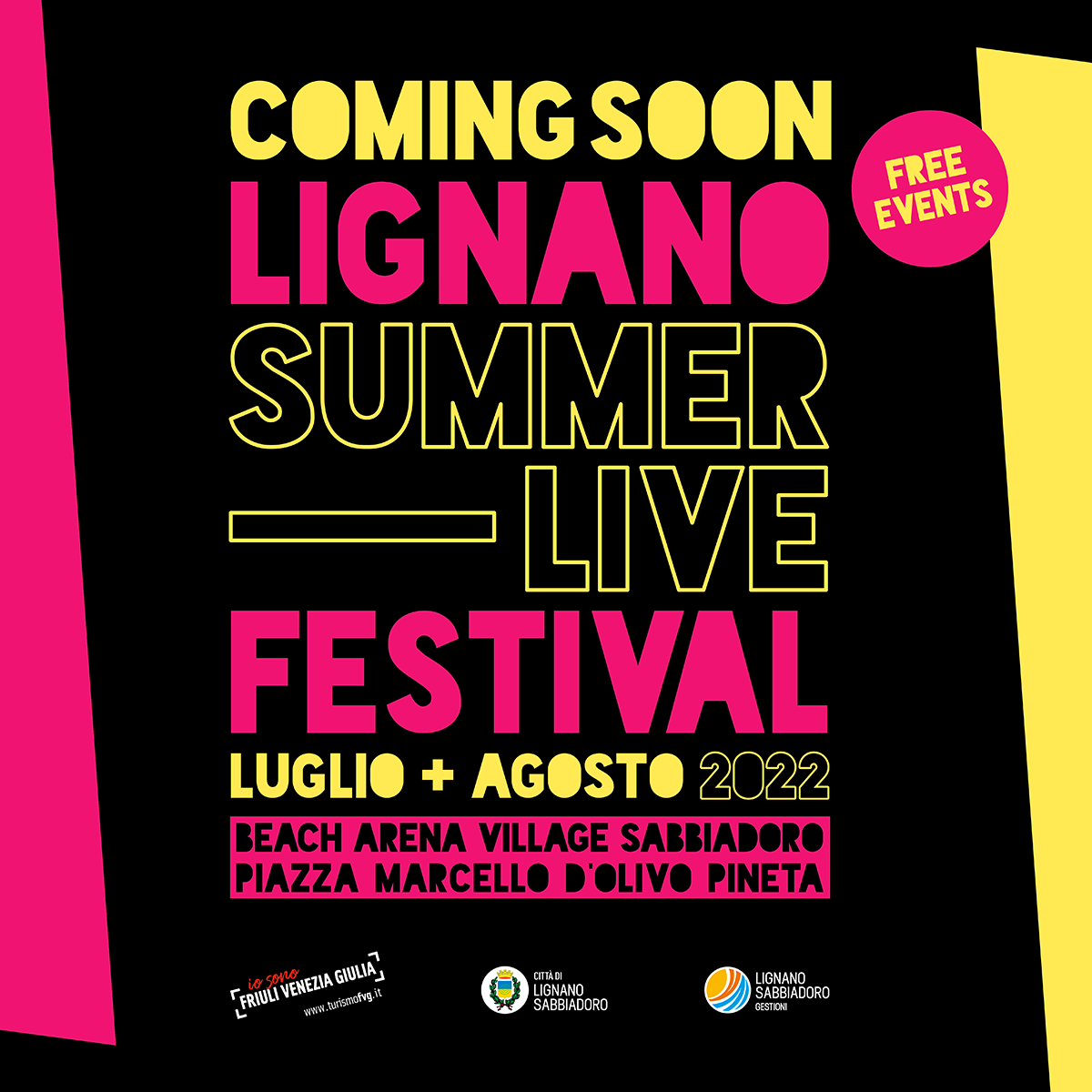 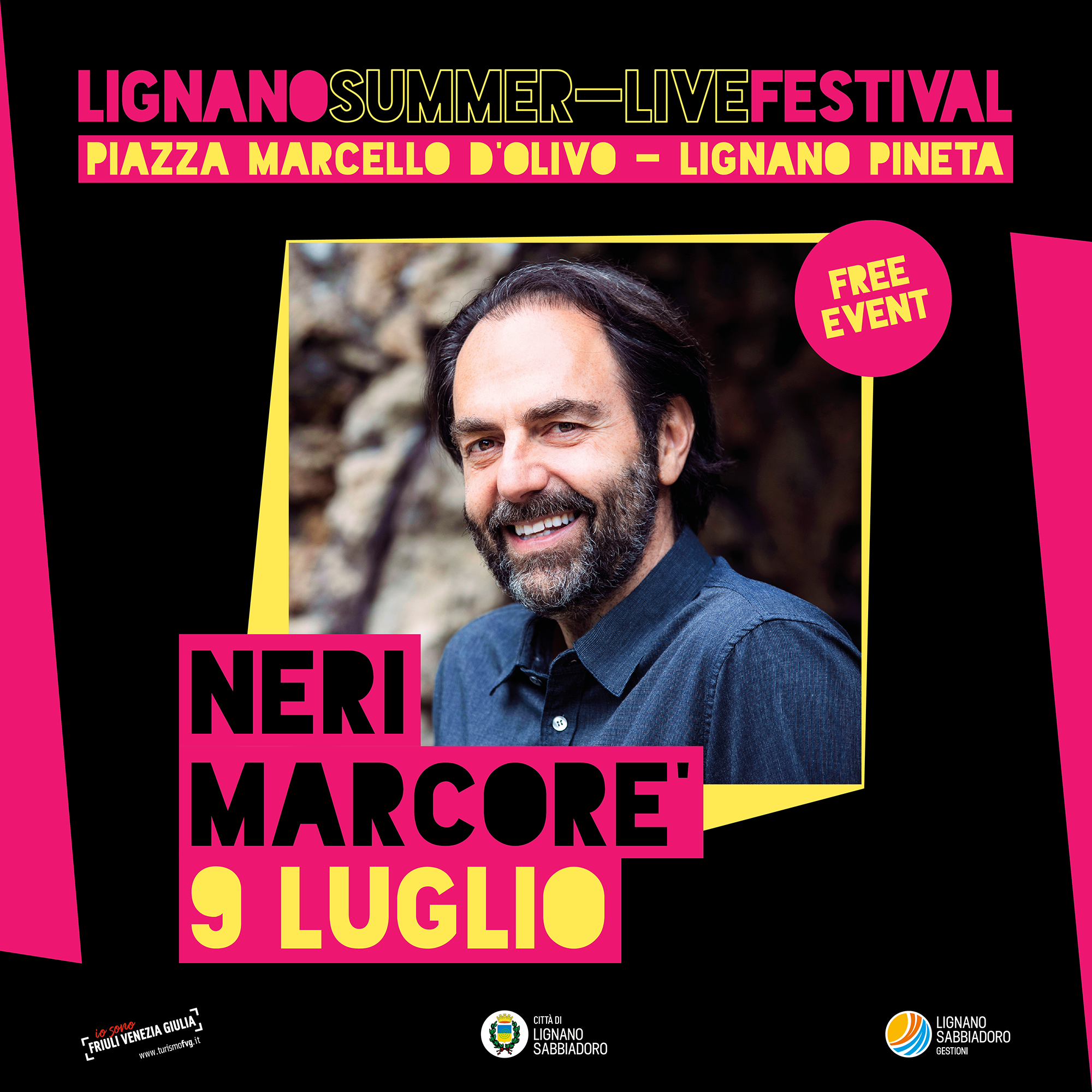 Neri Marcorè, is an italian actor, voice actor, television host, radio host and imitator, who made himself known to the public from a very young age at the ade of 12, participating in television shows conducted and organized by the radio host and showman Giancarlo Guardabassi. in 1993 he began to work as a voice actor, but he's also worked in the theater for the first time. in 1994 he made his debut in cinema in the film Thieves of cinema by Piero Natoli and in 1995 he returned to television on Rai 3. in 2003, for his interpretation in the film by Pupi Avati "The heart elsewhere" he obtained a nomination for the Favid di Donatello as best actor and winned the Silver Ribbon.

Noemi, pseudonym of Veronica Scopelliti, is an italian singer who became known in 2009 after the participation in the second edition of X Factor Italy, in which she was the most successful singer. After the show she signed a contract with the record label Sony Music. During her career she has received several awards and recognitions and has participated to seven Sanremo Festivals, including the 2022 edition with Ti amo non lo so dire. 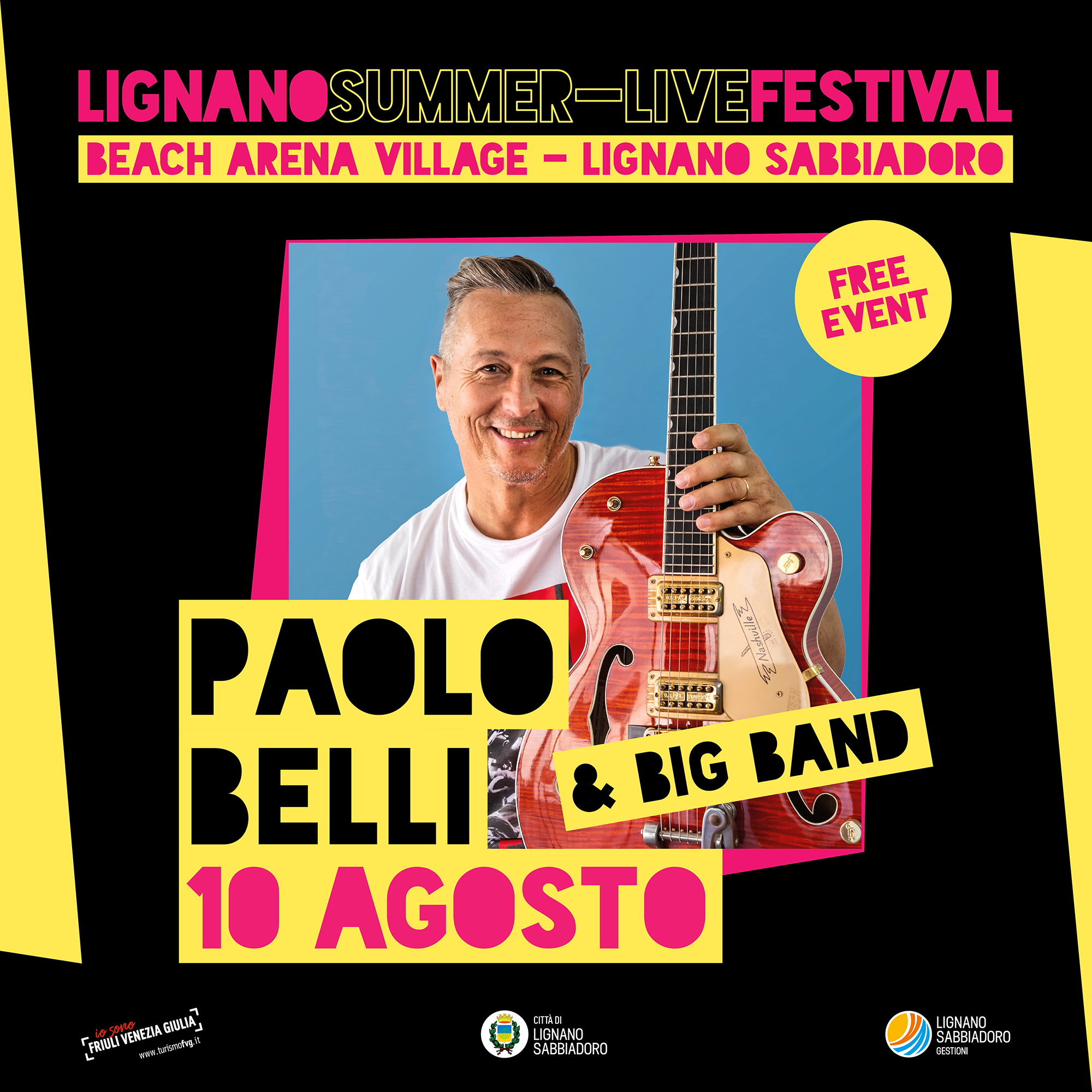 A career spanning over 30 years spent in music, TV and theater, with over a thousand live concerts in Italy and abroad, two highly successful theatrical performances staged for six seasons, and the television commitments that see him , with his Big Band, protagonist of the first RAI evenings most loved by the public for over 20 years. The Paolo Belli & Big Band concert is a unique show of its kind, fun, sunny, with an engaging rhythm, in a crescendo of notes and emotions capable of making the audience the protagonist and an integral part of the show itself. 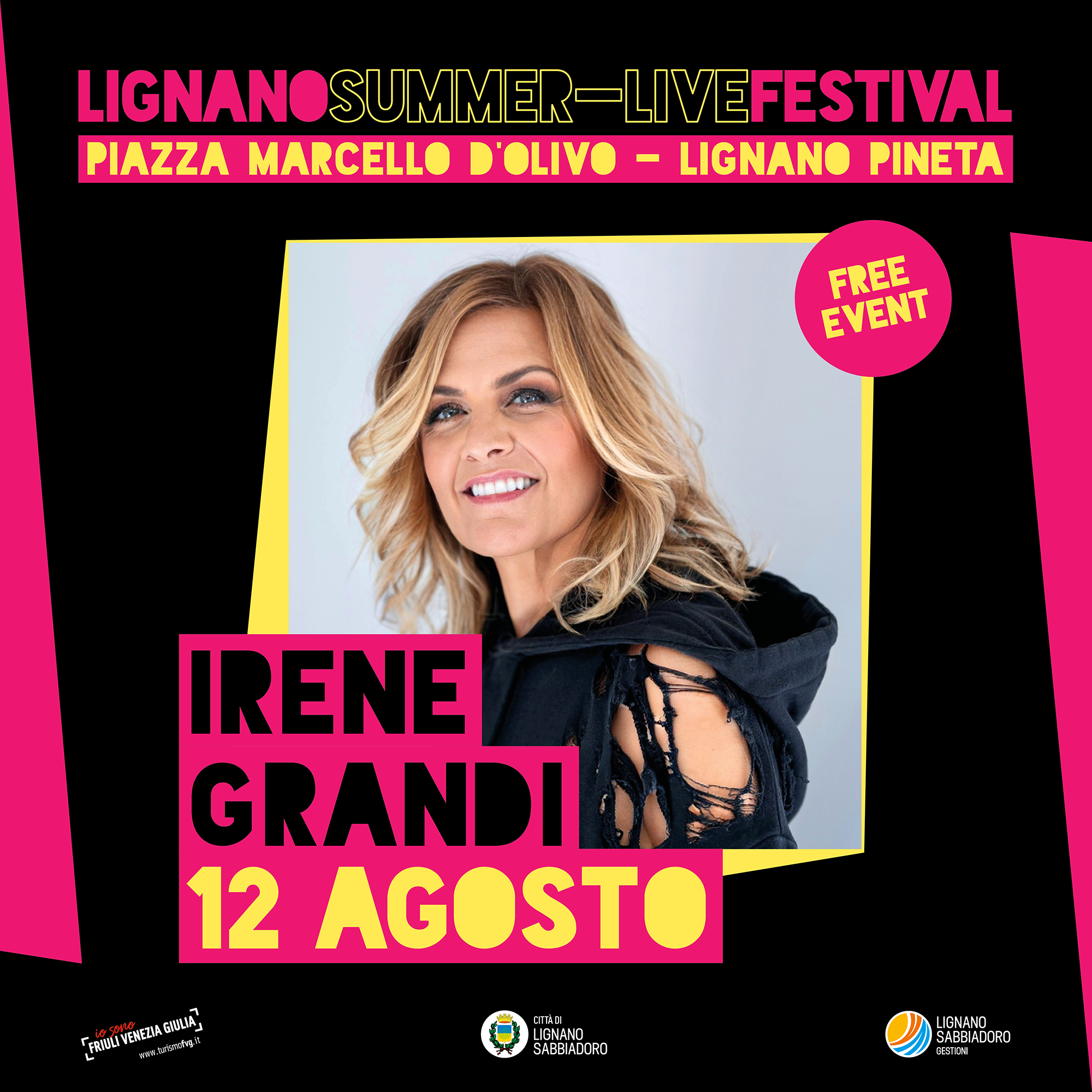 Irene Grandi, is an Italian singer and songwriter, who in 1994 was discovered by the general public thanks to the songs Fuori and T.V.B., written for her by Kovanotti. The great success however came the following year, in 1995, when she sold more than 500,00 copies of the album "In vacanza dauna vita". During her career she has touched various musical genres, including rap, pop, soul, blues, rock and jazz, but without giving up the Italian melody, often working with artists from the national music scene.

Ennio Morricone, famous all over the world, was a courageous composer and experimenter. Ennio Morricone: Music, Cinema, conceived by Roberto Fabbriciani, his long-time collaborator, is a program that contains famous themes from films and pure music. Together with Roberto Fabbriciani, soloist and conductor, the soprano Susanna Rigacci participates, the only vocal interpreter and much loved by Morricone in the last 20 years of her concert activity and the FVG Orchestra. 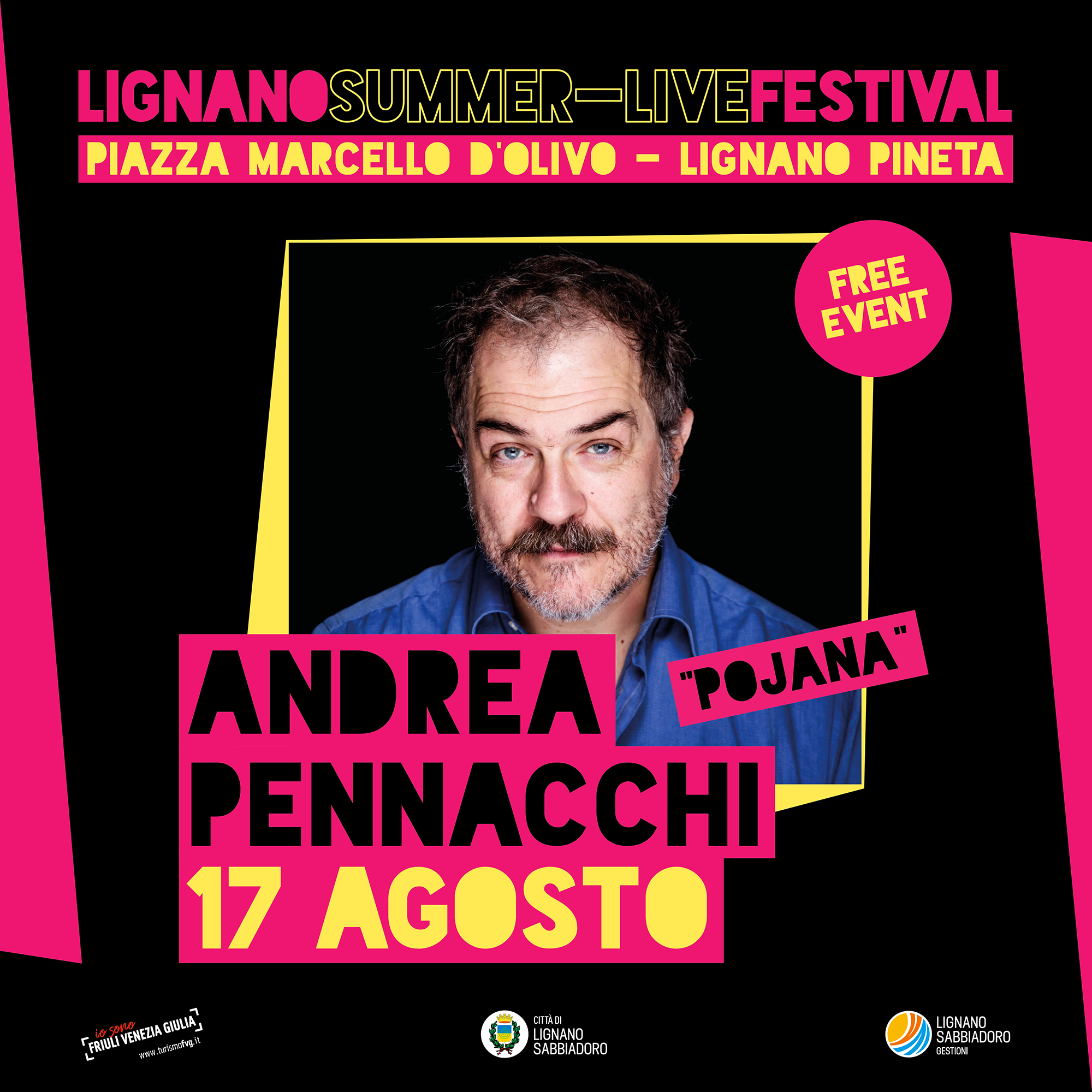 Andrea Pennacchi, known as "Pojana" is an italian actor, playwriter and theater director. Pennacchi began his training as an actor with the Popular Research Theater - University Theater Center of Padua. Subsequently, thanks to a collaboration with the director Gigi Dall'Aglio as an assistant, he learns the fundamentals of direction and theater writing. in 2011 he wrote and performed the show Eroi which ranks among the finalists for the Off Prize of teh Teatro Stabile of Veneto. Then he also began to work on tv by taking part in several fiction including Non uccidere, Don Matteo and 1994. in 2018 he brought the monologue This is Racism - Ciao terroni at Live propaganda and then becomes a regular guest of the broadcast with the monologues of his character, the "Pojana".

But the great events do not end there, we remind you that the zero dates of the Cremonini, Maneskin and Jovanotti tours will be held at the G. Teghil Stadium and at the Bell'Italia Beach, in addition to many other events organized in the Arena Alpe Adria throught the Summer.

So what are you waiting for? This Summer come to Lignano Sabbiadoro to have fun and experience unforgettable moments.

DISCOVER ALL THE EVENTS