It has now been working for a few days in “double-ended” mode but it is only on 31st July that officially inaugurated the enhanced X River service, the boat connection that allows cyclists and pedestrians to cross the Tagliamento River and quickly connect the coasts of Lignano Sabbiadoro and Bibione.

At the inauguration happened on 31st July 2019 at the new dock of Lignano Sabbiadoro many authorities intervened, both from Friuli Venezia Giulia and from the nearby Veneto region. In addition to administrators and local operators, the President of the Regional Board Massimiliano Fedriga, the President of the Regional Council Pietro Mauro Zanin and the regional councilors Mauro Bordin, Barbara Zilli and Fabiano Barbisan were present at the ribbon cutting ceremony. 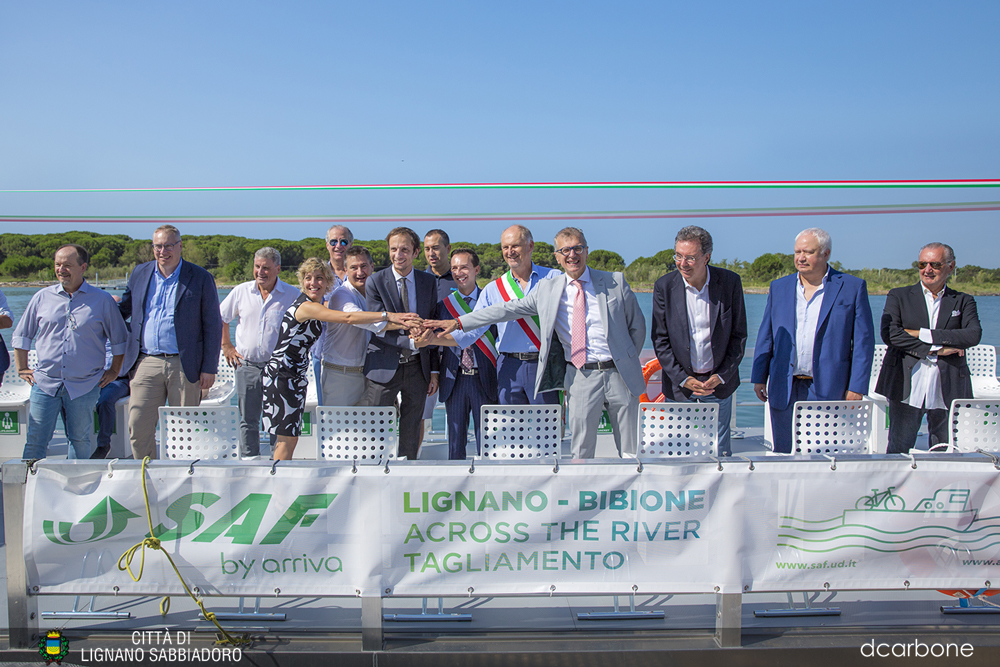 The ferry service was activated in May 2019 after the great success of the previous season during which over 50,000 passengers had been transported between the Friuli and Veneto shores. The important numbers had immediately led the operators and local administrations to hope for an expansion of the service with a larger boat capable of carrying more tourists and longer operating times.

The turning point came thanks to the intervention of SAF Autoservizi, the Friulian public transport company that from mid-July took over from local operators in carrying out the transport service by boat, effectively transforming X River into a scheduled service on water. This service adds to the already existing line connection via the lagoon between Lignano and Marano Lagunare.

A new SAF branded boat capable of transporting up to 25 people with bikes is operational every day between the Friuli and Veneto shores of the Tagliamento River (subject to weather conditions) until 10th September 2019 with the first ride from Lignano at 9.00 am and last ride from Bibione at 7.20 pm.
From 11th to 30th September, the schedule will include a first race from Lignano at 9.00am and the last morning run from Bibione at 12.40 am. After the lunch break the service will start again at 2.00 pm from Lignano to end with the last ride from Bibione at 5.40 pm.
The time required for crossing and embarking and disembarking activities is about 20 minutes each way and the cost of crossing is 1 € each way per person (children under 1 meter tall free). 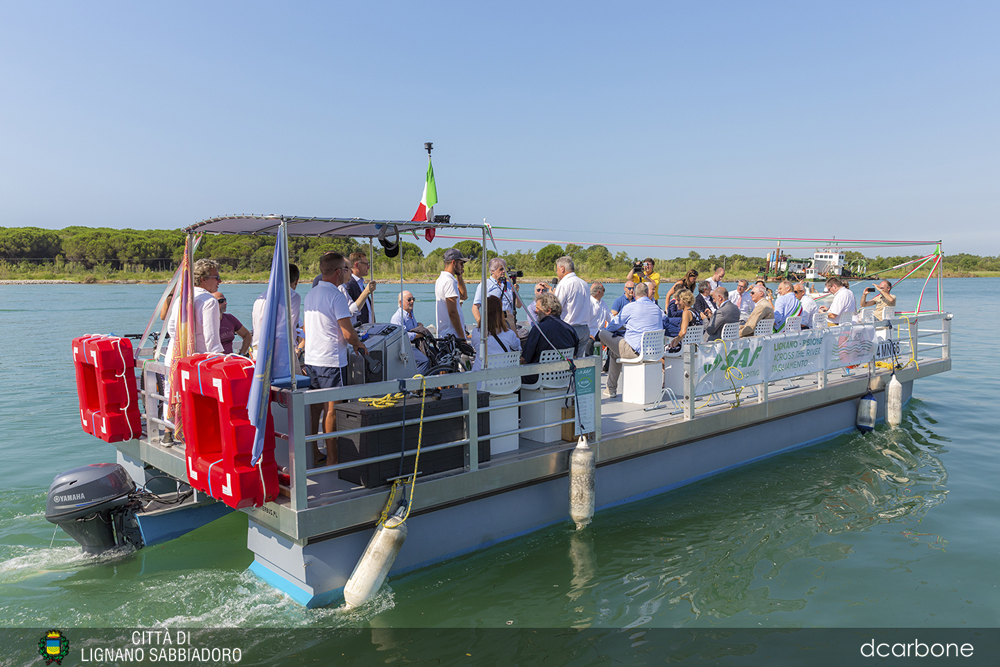 The sale of tickets is available at the Lignano dock and by Bibione lighthouse, as well as the SAF points, including numerous hotels in the two tourist areas.

In Bibione, boarding can be reached by following the lighthouse cycle path, while in Lignano there is a brand new boarding point located on the south dock of the Marina Uno Tourist Port equipped with bicycle hire and repair, electric bike charging and refreshment point.

"We are really pleased that the X River service linking Lignano Sabbiadoro and Bibione has been implemented and has now also become a local public transport service using a boat that can hold 25 passengers and as many bicycles." Says the Mayor of Lignano Sabbiadoro, the Lawyer Luca Fanotto, and continues "All this was possible thanks to the approval of our request to activate a local public transport service. I am satisfied that all our efforts made the boat connection even more practical and functional. I thank all the public and private subjects who have contributed to its realization, assuring the tourist and citizens an additional tool to discover our territory and the beauties that unite our localities. "

The CEO of SAF Autoservizi Alberto Toneatto comments: "I would like to underline the value of synergies like this, where all the parties involved - Region, Municipalities, tourism promotion bodies and local public transport - operate with the common goal of supporting the natural vocation of the territory  with a view to promote slow tourism in all its forms, bringing significant added value to these areas of international interest. I hope, once the current tender for the public transport of the FVG region has been completed, that these collaborations can be conducted not only on a local basis but also on a broader level, in order to strengthen the links with the neighboring regions also through services dedicated to tourism, an increasingly fundamental sector in the economy of these territories."